Growing up in La Ronge, a town with access to so many beautiful lakes and trails, I developed a passion for exploring the north. Although I now live in the south, in a completely different landscape, I still like to get back to Northern Saskatchewan. So, in January, I decided to change it up from my weekend trips to Grasslands National Park or Castle Butte and head back home for a weekend ski trip to Nistowiak Falls

Since I never seem to have enough vacation days, I decided to fit the trip into a regular two-day weekend. Luckily, I was able to round up some friends and family to join me. I left Coronach Friday afternoon and headed north, picking up friends Mark Nielson, Nathan Jones and Scott Fraser in Regina and Saskatoon along the way. We spent the night in La Ronge and left for Stanley Mission on Saturday Morning. 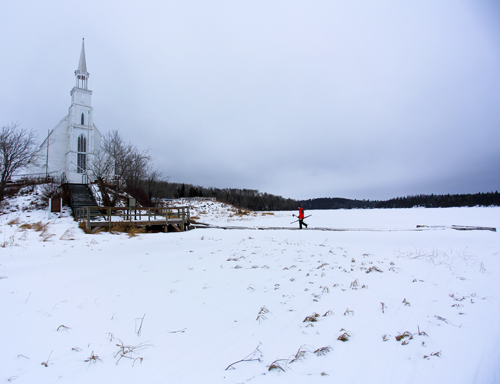 We headed out from Stanley Mission with six skiers and two snowmobilers hauling our gear. It’s possible to do a totally self-sufficient trip to Nistowiak, but it was much more fun to choose the luxurious options of having my dad and brother-in-law snowmobile with our gear to a rented cabin that we stayed in once we got to Nistowiak. 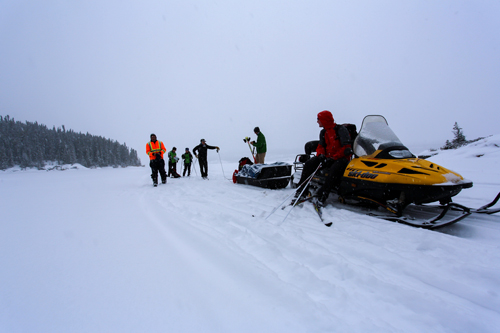 The ski to Nistowiak was about 25 kilometres over lakes and portages. Sights along the way included the beautiful Holy Trinity Church (built in 1860, it is the oldest building in Saskatchewan) and Little Stanley Rapids. With eight inches of fresh snow falling over the two days of our trip, we rarely saw the sun. But the tranquility of no wind and no sound other than that of your poles planting was an awesome way to reset from a busy work week. 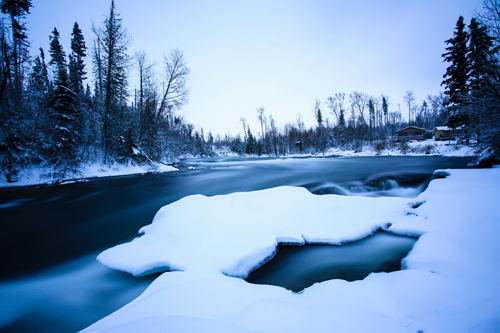 We arrived at Jim’s Camp at Nistowiak Falls around 5 p.m. on Saturday and had a nice warm wood-heated cabin waiting for us. Nistowiak is a Cree word that means a three-way junction, which at Jim’s Camp marks where the Rapid River flows in from the south to join the Churchill River. Jim’s Camp was built about 1980 by the late “Big Jim” McKenzie and his wife Annie at the very foot of the Falls, on land belonging to the Lac La Ronge Indian Band. It is primarily used as a summer sport fishing camp, but it has one winterized cabin heated by a wood stove. The cabin serves as a checkpoint during the highly popular Stanley Mission Poker Rally held every January. It can also be rented by visitors such as us.

Sunday morning, after getting a good eight-hour sleep and only having to wake up to stoke the fire once, we hiked about a kilometre up from the cabin to see Nistowiak Falls. The main falls are a very impressive drop with a strong flow of water all year long. In the winter months, the spray from the falls creates incredible ice formations along the edges. 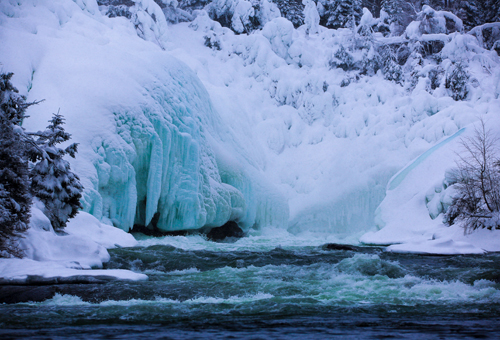 After viewing the Falls and packing our gear, we started back to Stanley Mission using a more southerly route through Iskwatikan Lake. This route stays closer to shore and allowed us to keep our direction when the falling snow reduced visibility. We came across many locals out fishing and enjoying the snowy weather. We then entered a hilly, bush trail that eventually brought us back to Stanley Mission. When we arrived, there was a small fishing derby being held near town on the ice of Mountain Lake. The town of Stanley Mission is a very active community with many outdoor events being held throughout the year.

Once back to Stanley Mission, I still had 880 kilometres of driving ahead of me to return home to Coronach. Although I was pretty tired at work on Monday morning, the expedition was well worth the effort. I would recommend this winter trip to anyone that enjoys skiing, snowshoeing or snowmobiling! 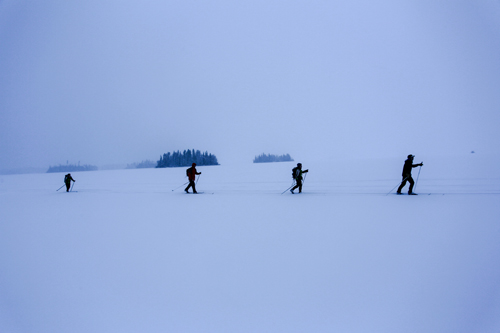