Spring is here, love is in the air, and it’s time to party – at least for birds. Strutting around in their finest spring regalia, the guys try to impress the gals by showing off and engaging in elaborate mating displays that range from cute to curious to downright mystifying.

With phenomenal birdlife and easy access to several wildlife hotspots, there’s no better place than Saskatchewan to enjoy these springtime spectacles. We’ve long been known as “North America’s Duck Factory” where a quarter of the continent’s ducklings are raised, not to mention a profusion of grebes, geese, grouse, hawks, shorebirds, songbirds and marsh birds galore.

The province boasts around half of Canada’s pelicans, a quarter of the world’s endangered piping plovers, the world’s largest concentration of white-winged scoters, and the largest inland concentration of bald eagles anywhere. Southern Saskatchewan is among the last Canadian strongholds of increasingly rare and endangered grassland birds, the most famous being burrowing owls and greater sage grouse.

But it’s not just about the most or the rarest. Everyday encounters are just as rewarding: a cheery meadowlark announcing the arrival of spring, woodpeckers busily carving a nest, or the brilliant flash of orange from arriving Baltimore orioles.

Male birds rely partially on their handsome good looks to attract a mate, though showing off a bit also helps. Commonly found in ponds and wetlands, the male ruddy duck cleverly uses bubbles as part of his act. He inflates an air sac in his thick neck then pumps his brilliant, sky-blue bill up and down, whacking the underside of the bill against the inflated neck. This produces a drumming sound as well as an impressive array of bubbles. He caps off the performance by opening his bill and belching. What female wouldn’t be impressed? 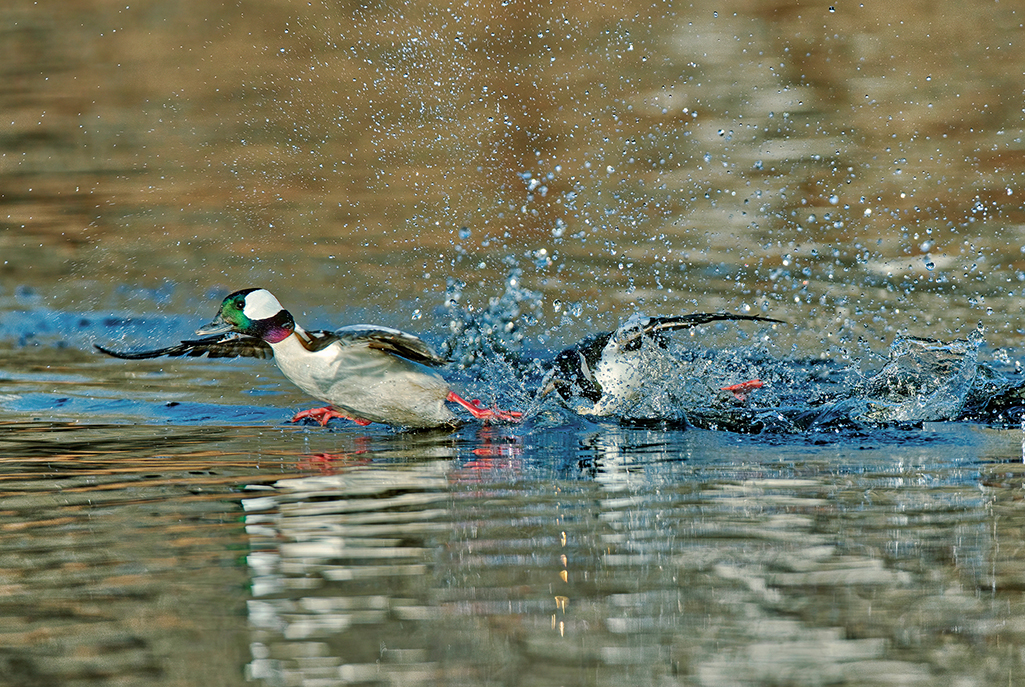 Buffleheads, our smallest diving ducks, prefer a fast and furious approach. When the male turns at just the right angle, the light catches the dazzling iridescent mix of violet and green on his neck. Part of the mating display is for couples or competing males to half-run and half-fly across the surface of the water, making a big fuss and creating the biggest possible splashes.

Look for wildlife in Ducks Unlimited projects, heritage marshes, nature sanctuaries, parks, and conservation areas such as Beaver Creek near Saskatoon. Prominent locales include the Quill Lakes International Bird Area, Nicolle Flats in Buffalo Pound Provincial Park, and the Redberry Lake World Biosphere Reserve, to mention only a few. See the “Bird and Wildlife Viewing” section on the Tourism Saskatchewan website for an extensive listing.

First on the Continent

Established in 1887, the Last Mountain Lake National Wildlife Area (NWA) has the distinction of being North America’s first bird sanctuary. The north end of the lake along with adjoining wetlands and grasslands provides a haven for over 300 bird species. The highlight is the 14-km driving route that passes lakeshore, wetlands, water control structures and grasslands. This is our favourite site to photograph pelicans that nest on an island in the lake and often feed near the outlet of water control structures close to the road. 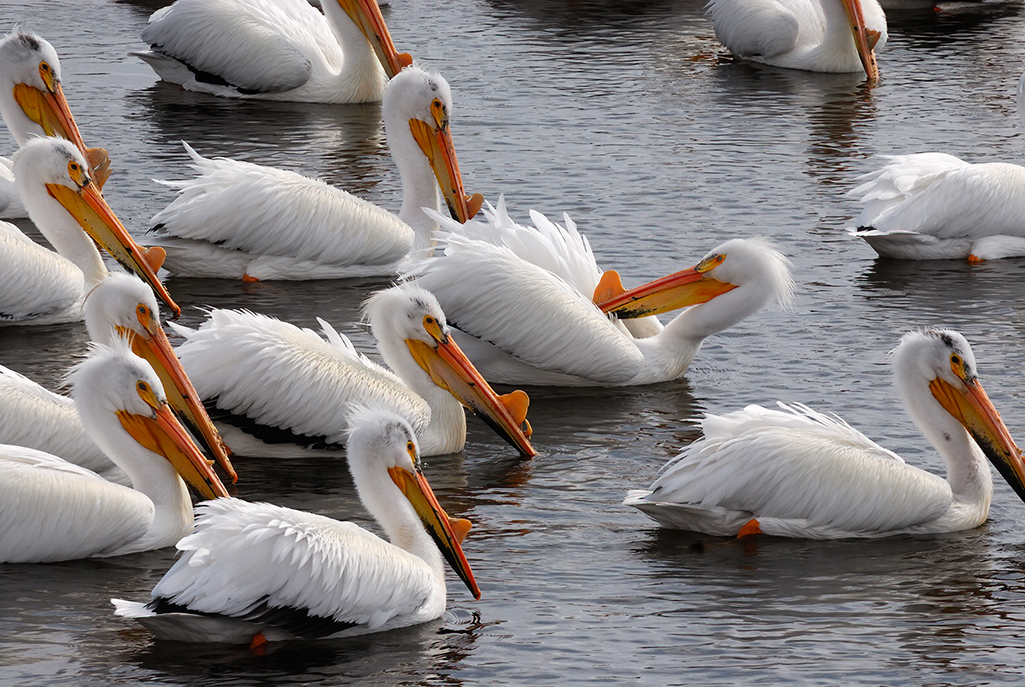 The NWA is undergoing major upgrades. A new walking trail and viewing tower are in place, and this year they are putting the finishing touches on a new pavilion building to house displays, maps and trail brochures. A podcast is being developed to guide visitors along the driving route.

Tops in the Western Hemisphere

Besides being rich in resident species, Saskatchewan hosts a remarkable spring migration of over 30 species of shorebirds. On their way from southern wintering grounds to nesting sites as far north as the High Arctic, they stop to feed in places such as the Chaplin/Old Wives/Reed Lakes Complex, which the Western Hemisphere Shorebird Reserve Network has named as having Hemispheric Importance. This is the only such designation in Canada between the east and west coasts. 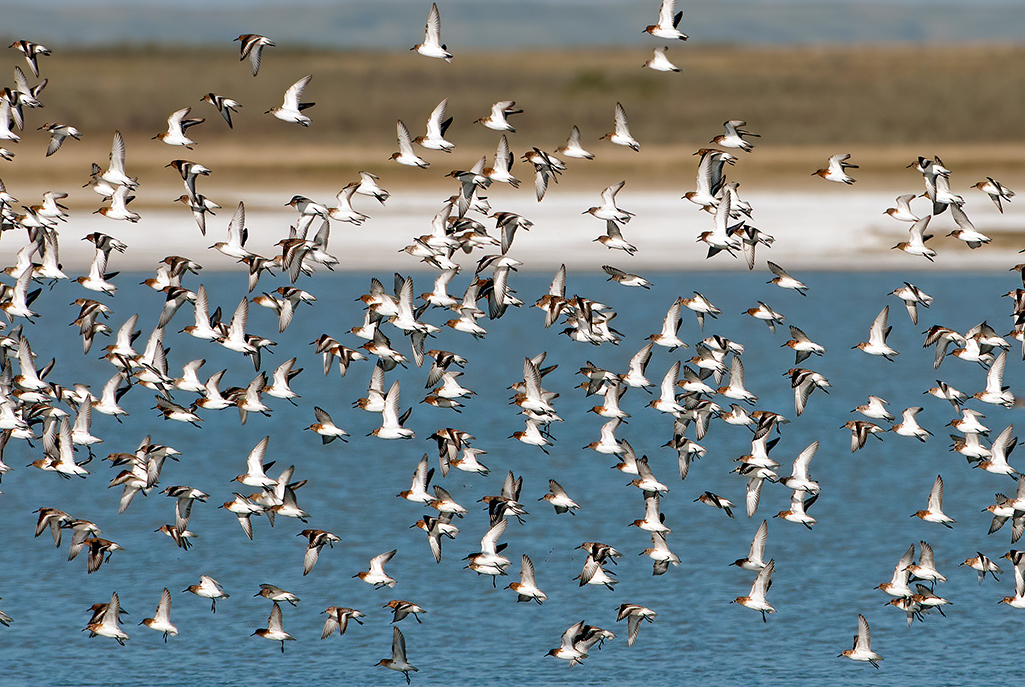 The more than 100,000 visitors dropping in for a bite to eat include dowitchers, ruddy turnstones, red-necked phalaropes, red knots, black-bellied plovers and various sandpipers. The sanderlings take centre stage around late May, with close to half of the world’s population migrating through Chaplin Lake. Their flight resembles an aerial ballet as tightly grouped flocks dart around with choreographed precision. 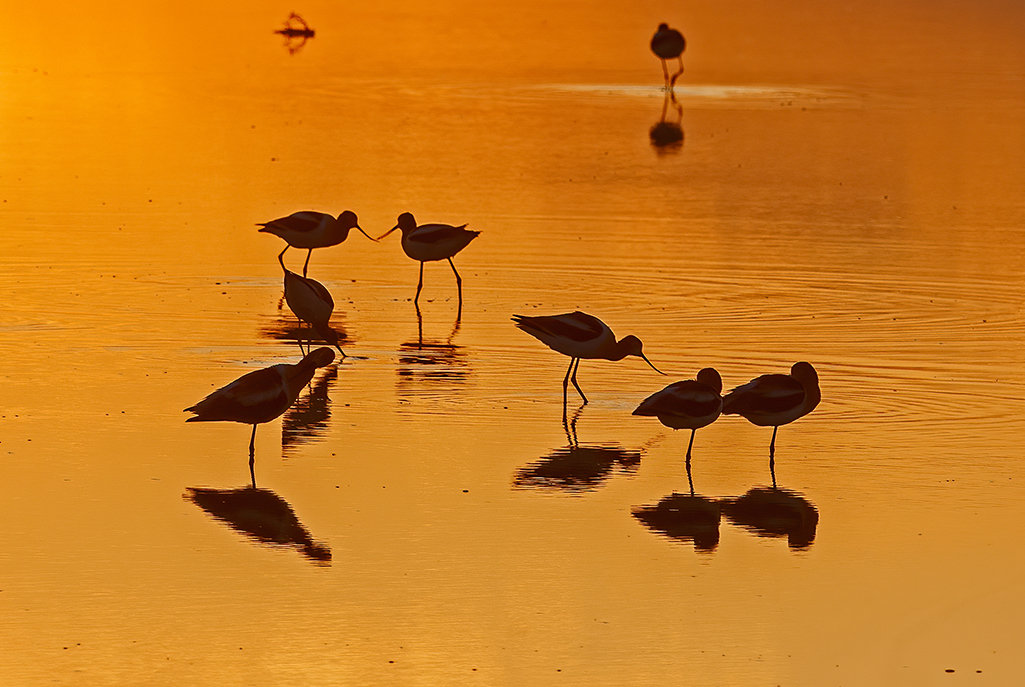 Chaplin Lake is right beside the Trans Canada Highway, roughly halfway between Moose Jaw and Swift Current and next to the town of Chaplin. We can often find shorebirds along Highway 58 just south of town where it passes the lake and adjoining wetlands. Also head 20 km west to Morse, where a sign proudly announces that this is “A Town that’s for the Birds!”

Along the way, stop at the viewing tower looking over Reed Lake. Directly south of Morse, take the road that crosses Reed Lake, getting you close to birds in the water and mudflats next to the road. In spring, wetlands throughout this region yield not only migrants but also a rich array of resident species. A few such as black-necked stilts and white-faced ibis are difficult to find elsewhere. 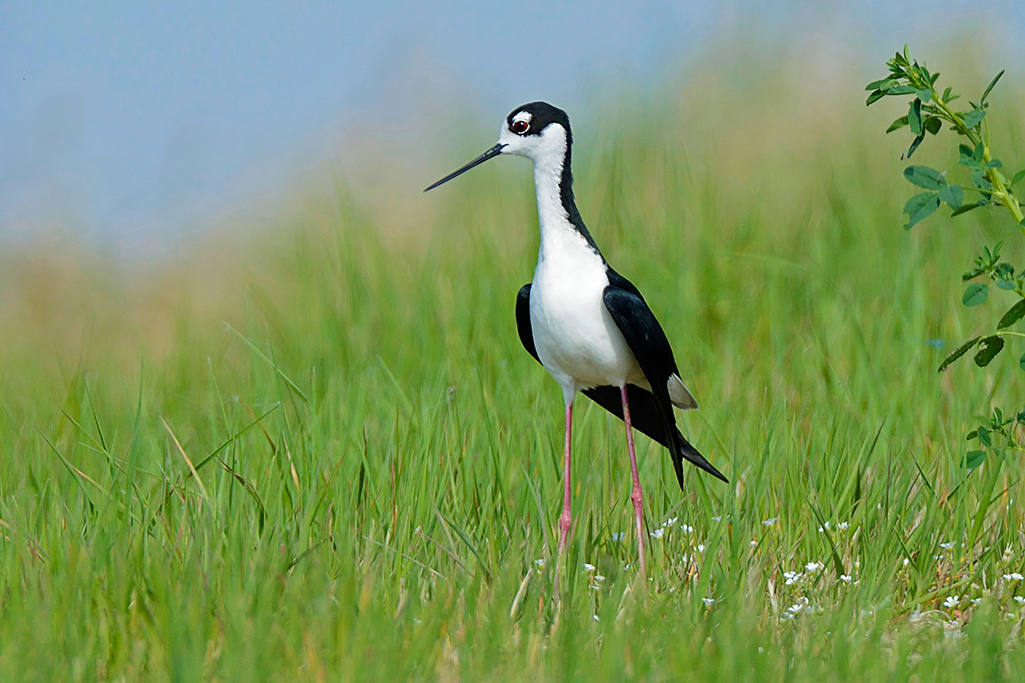 One of our more common resident shorebirds is also the most elegant. The American avocet is a long-legged beauty with a brilliant rusty-orange head and neck. If you come across an amorous couple, watch carefully for their distinctive dance that happens in a flash. The male and female cross bills, one puts a wing over the other, and they do a quick pirouette. 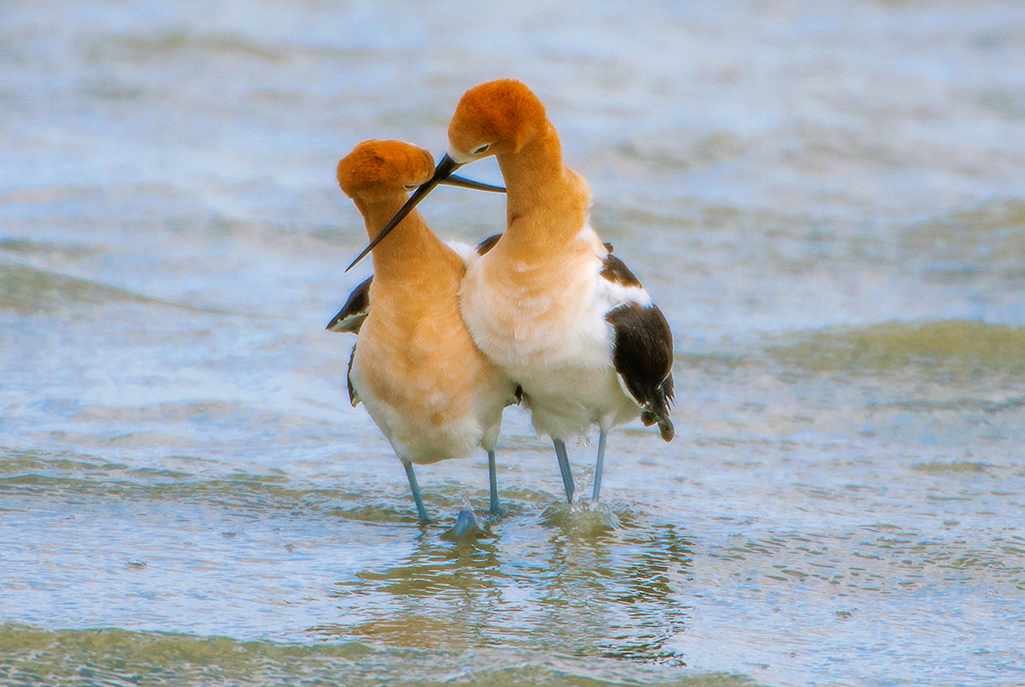 The dance of the sharp-tailed grouse, Saskatchewan’s official bird emblem, is more vigorous. Males look fairly drab most of the year. That changes in spring when they puff themselves up, inflating bright purple sacks on their necks while yellow eye combs are fluffed up like bushy blonde eyebrows. With heads down, wings lowered, and tails pointed skyward, they go round and round and back and forth like out of control wind-up toys, propelled by rapid-fire foot-stomping that we might hear a kilometre away. Look for them in undisturbed natural prairie, such as Grasslands National Park. 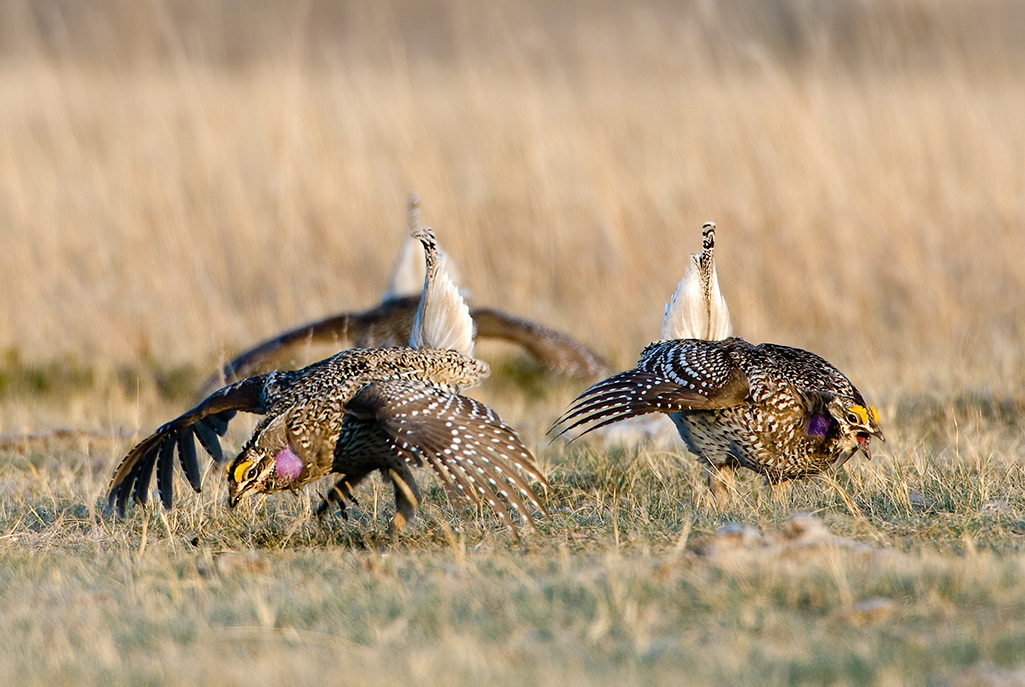 The male ruffed grouse is even louder. These bushland drummer boys stand on logs and flap their wings so fast that it produces an impressive drumming sound intended to both attract a mate and to establish territory. Listen for them in bushes throughout the aspen parkland. 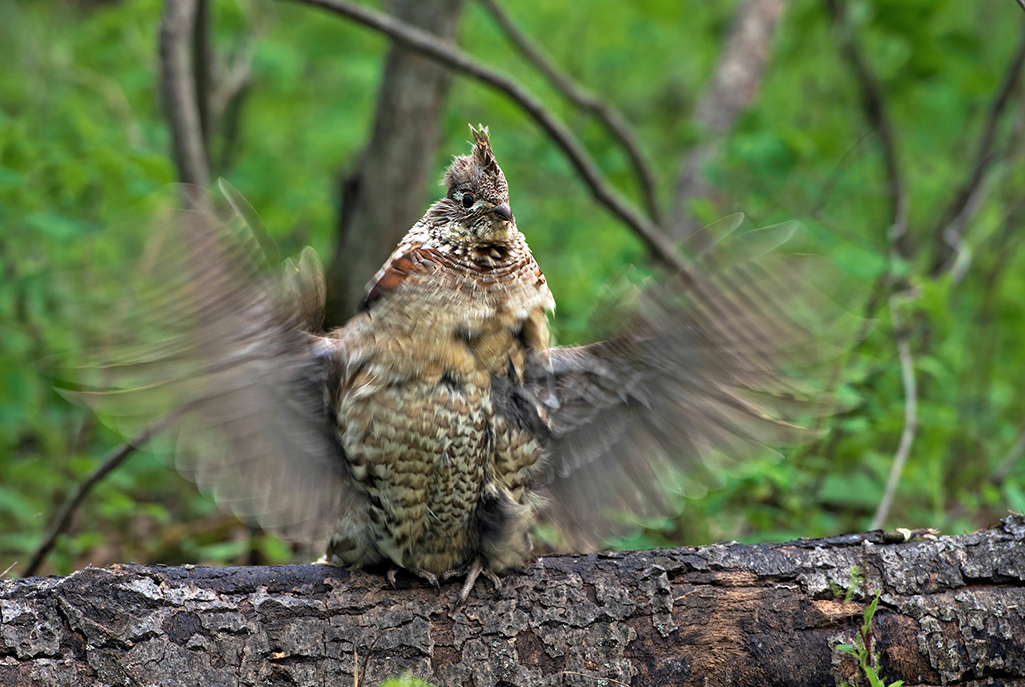 The best part of spring in Saskatchewan is that great wildlife viewing is never far away. While prominent wildlife hotspots provide the best prospects, it may be just as rewarding to take a drive in the countryside, especially where wetlands line the road. If you want to photograph some of the goings-on, a useful approach is to stay in your car and not make any noise or sudden moves. Birds feel less threatened by cars than people in the open and may continue going about their business. 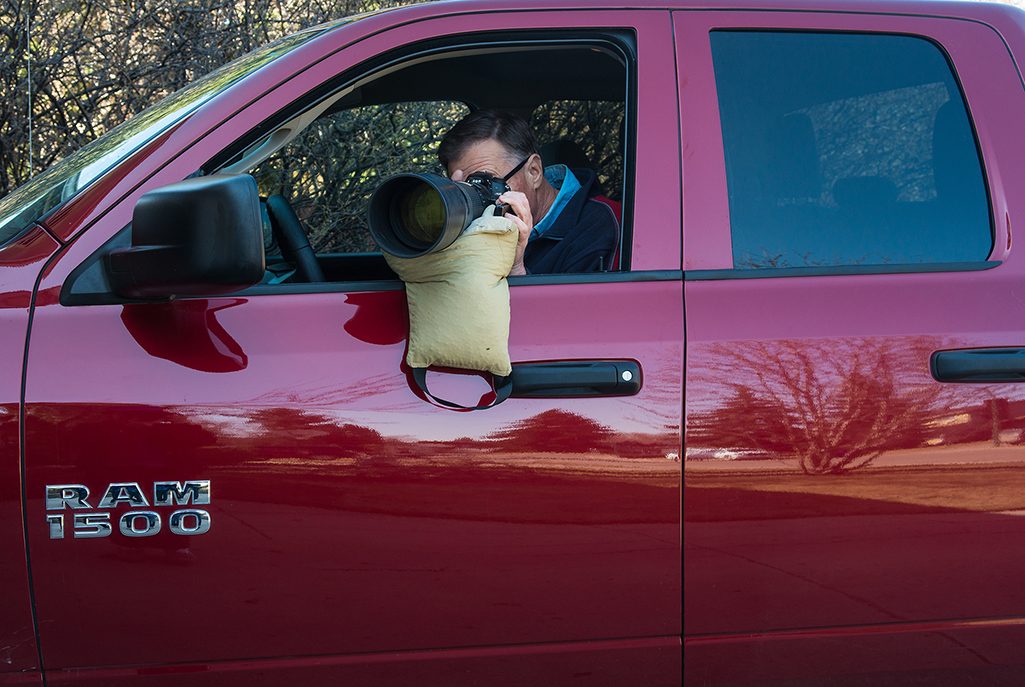 Don't overlook wildlife habitat in urban parks. Since birds in cities are used to people, it's usually easier to get close. Some excellent spots include Wascana Marsh in Regina, Wakamow Valley in Moose Jaw, Tatagwa Parkway Trails in Weyburn, among many others.

In addition to heading out on your own, check the Tourism Saskatchewan website for operators offering guided wildlife tours. 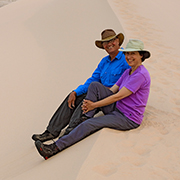