Learn about Saskatchewan’s history, economy and overall quality of life over at the Government of Saskatchewan website. Visit our Statistics page for the lowdown on population, climate and much more.

Here are some interesting tidbits about Saskatchewan: 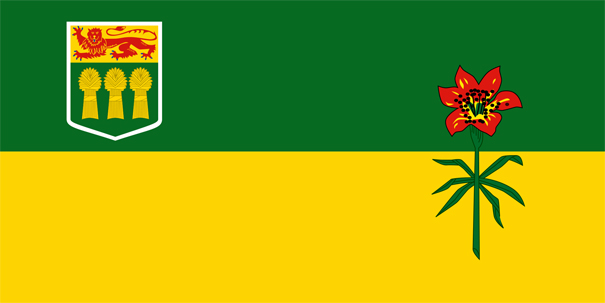 Flag: Saskatchewan's official flag was adopted in 1969. It features the provincial shield of arms along with the floral emblem, the western red lily. The flag's upper half is green, representing Saskatchewan's northern forests; the lower half is gold, symbolizing the southern grain areas.

Flower: In 1941, the western red lily was chosen as the official flower of Saskatchewan. This lily grows in moist meadows and semi-wooded areas. With its flaming red blossoms, it stands out brilliantly against a natural green background. The western red lily is a protected species.

Bird: The sharp-tailed grouse is one of Saskatchewan's most popular game birds. It was selected as the provincial bird emblem in 1945.

Grass: In 2001, needle-and-thread grass was designated Saskatchewan's official grass. It's a native bunchgrass common to the dry, sandy soils of the Northern Plains. Seed stalks may reach 1.3 m (4 feet) in height and leaves are up to 30 cm (12 inches) long and very narrow. The name comes from the shape of the seeds, which are sharply pointed and have long, twisted, thread-like fibres.

Tree:  In 1988, the white birch was adopted as the official tree of Saskatchewan. This hardwood tree is found across the northern three-quarters of the province. Typical uses for the wood include lumber, plywood, veneer and fuel.

Mineral:  Sylvite, also known as potash, is Saskatchewan's official mineral. We are the world's largest producer and exporter of potash. Our vast reserves of potash are expected to last for hundreds of years at current rates of production. Over 95 percent of the potash produced in Saskatchewan is used for fertilizer purposes.

Animal:  Saskatchewan designated the white-tailed deer our official animal in 2001. Here in our more northern latitudes, the white-tailed deer tends to be larger than its southern brethren, reaching heights of more than a metre (3.5 feet) at the shoulder and weighing as much as 180 kg (400 lbs). Adults have a reddish-brown summer coat and a greyish-brown winter coat, with white underparts. The name comes from the white underside of the tail, which is raised like a flag when the deer is running or frightened.

Sport:  Curling was named Saskatchewan's official sport in 2001, although many have considered it so for years. Once called the "roaring game" because of the thunderous noise made by corn brooms used to sweep rocks down the ice, curling has a rich history in the province. The fabled Richardson brothers, curling out of Regina, won four Canadian and World men's championships between 1959-63. Another extraordinary rink from Regina, the Sandra Schmirler team, won three Canadian and World women's championships in the '90s, followed by the first ever women's Olympic gold medal in curling at 1998. 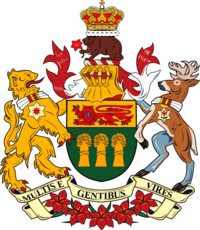 Emblem:  Multis E Gentibus Vires, "From Many Peoples Strength" - The provincial Coat of Arms was granted through Royal Warrant from Queen Elizabeth II in 1986. It is an augmentation of the original shield of arms adopted by Royal Warrant of King Edward VII in 1906. A crest of a beaver and crown is placed above the shield. On either side of the shield are supporters: a lion and a deer. The shield itself displays the royal lion and three gold wheat sheaves, symbolizing Saskatchewan agriculture. The base is formed of western red lilies, Saskatchewan's floral emblem.